There are a couple of things in life that are just meant to be together: the beach and the ocean, salt and pepper. Skiing and lunch break in a mountain lodge. And while skiing we have the same problem every day: What do we want to eat? So if you have the exact same problem, here is a little help for you! We have come up with a list of our favourite typically Austrian dishes!

A classic Austrian dish. It is named after the Austrian emperor Kaiser Franz Joseph and basically means “the emperor’s rubbish”. It is made of a scrambled sweet pancake (called “Palatschinke” in Austria) and is served with powdered sugar and stewed plums. There are a lot of stories about the origin of Kaiserschmarrn. One of them says that it was created when the emperor unexpectedly came into the castle’s kitchen one night right after a cook had messed up a Palatschinke and was about to throw it away. The emperor ate it instead together with some stewed plums and loved it so much that he decided it was a new dish. 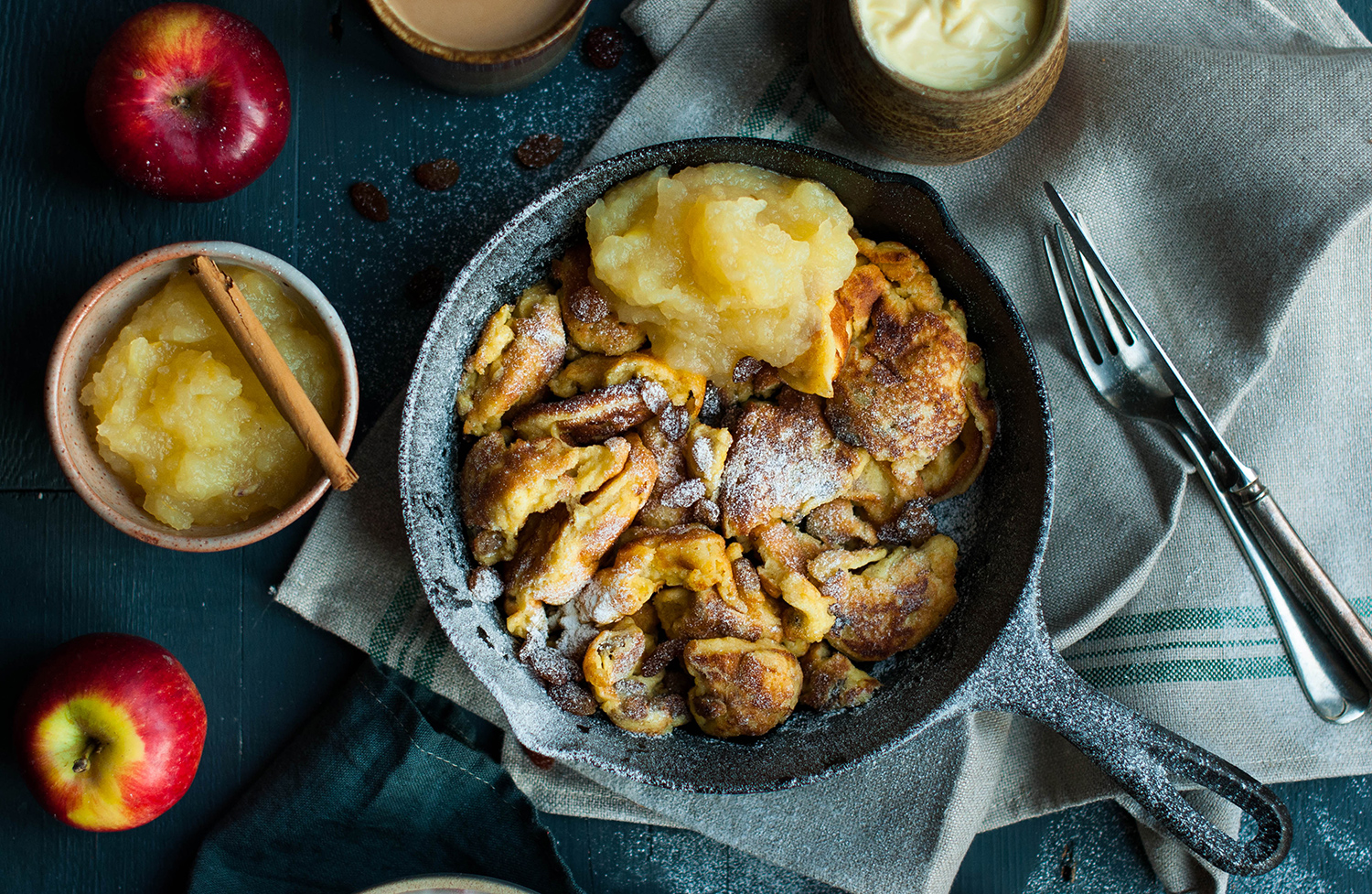 Spätzle is a certain type of pasta. For this dish you layer cheese and spätzle and put it into the oven. Just like the Kaspressknödel Käsespätzle are usually made with regional cheese. Before being served they are garnished with roasted onions. Depending on what kind of cheese is used and how many onions are used it is maybe not the best food if you are planning on meeting someone special during après ski!

Translated it means something along the lines of “pressed cheese dumplings soup” which is a rather complicated name for a very simple dish that will warm you up on even the coldest days. The dumplings are made of a special kind of bread and cheese that is typical for the region that you are in. In Salzburg you will usually encounter them made of beer cheese, in Tyrol of mountain cheese and in Vorarlberg of Sura Kees.

They are fairly big, hemispherical dumplings made of a yeast dough and oftentimes filled with something called Powidl (which is a certain kind of plum jam). Shortly before being served molten butter is poured over it and a mixture of sugar and poppy seeds is sprinkled on top of it. A lot of times they are also served with vanilla sauce. As you can see, it is probably not the healthiest food you can find on the menu, but it is just soooooo good!

It is widely spread kind of strudel. Strudel dough (sometimes also puff pastry, curd cheese dough or yeast dough) is filled with sliced apples, dark raising and breadcrumbs. Sometimes it is served with vanilla sauce or whipped cream, however some Austrian will be skeptical when you order it with those extras – a typical Austrian Apfelstrudel is supposed to be eaten without whipped cream! 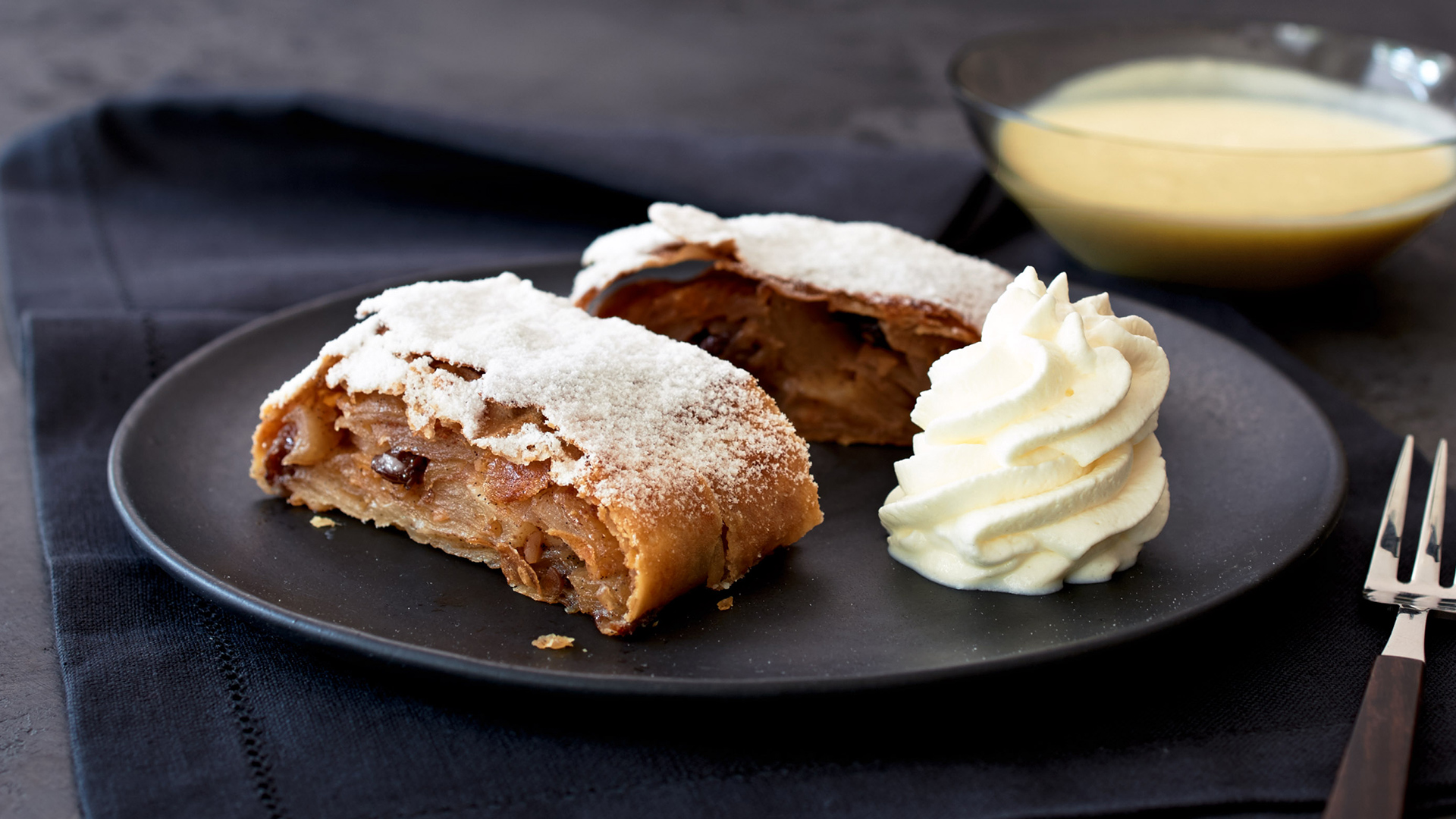 This is one of our favorite dishes when it is really cold outside. Gulasch is a ragout that consists of different types of meat (often in combination with each other), peppers, onions and often also garlic and caraway. The meat is slowly cooked which makes the sauce very creamy – so it is really the perfect dish after or in the middle of a hard, cold day of skiing.

The so-called “Carinthian Noodles” resemble the Italian Ravioli (which is something that you should not mention in front of people from Carinthia) and consist of a very thin noodle dough that is formed to little pockets. These pockets are filled with a lot of different ingredients. Our favourite kind is the Kärntner Kasnudeln which are filled with a curd cheese and potato mixture. If you want to have something similar for dessert, we definitely recommend the Kletzennudeln which consist of curd cheese and a special kind of pears.

This is definitely our personal favorite! There is just nothing better than a good Schweinsbraten after a long day of skiing (or during your lunch break!) Schweinsbraten is a roasted piece of a domestic pig, seasoned with caraway, coriander, majoram and garlic. If you like it crispy, you definitely want a “Krustenbraten” which includes stewing the meat until the rind is crispy.

The perfect meal in case you cannot decide on what to eat and just want a lot of different flavours! Depending on where you are, it always consists of something else, but it is usually a combination of very rich meat and sausage, like bacon, smoked meat and cold schweinsbraten, and bread and cheese. The perfect drink for it would a cold, small beer – called Seiterl. We hope we just made the decision making process for what to eat on the slopes a little easier. We will definitely get something to eat now, seeing as all the descriptions of food have made us really hungry! Mahlzeit!